Should You Be Worried About Inflation? 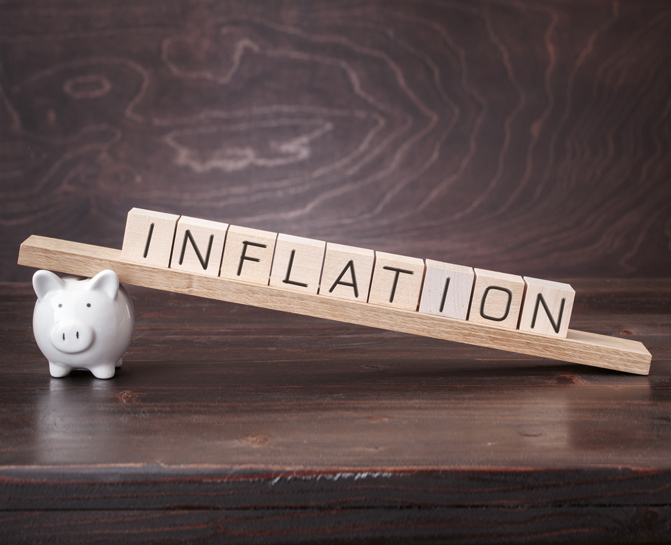 July 27, 2021- Inflation is an inevitable result of economic ebbs and flows. Whether caused by demand-side issues, supply-side challenges or a mix of factors, inflation decreases consumer purchasing power as the prices of goods and services rise. Consider how milk and gas prices have increased over the decades. A century ago, the average cost of a gallon of milk was something like $0.35 compared to about $3.30 today. Filling your gas tank put you back approximately $0.15 per gallon versus today’s $3.75[1].

Policymakers, economists and business leaders track and measure inflation using indices published by government agencies. For example, every month, the United States Bureau of Labor Statistics publishes the Consumer Price Index (CPI) as a measure of the average change in prices paid by consumers during the previous month.

In the wake of the COVID-19 pandemic, many of us felt the need to evaluate our financial situations against short- and long-term projections for the country’s economy. We adjusted our budgets, cut back on frivolities and re-prioritized. Then — just when things started to feel stable again —  restrictions eased, discretionary spending steadily increased and the CPI rose by 5 percent in May, its highest increase in 13 years[3]. For some perspective, The Economist reports that the median, mid-forties-aged American worker has never experienced core inflation rates above 3% before now[4].

What does this period of high inflation mean for the average consumer or investor? Let’s take a deeper dive.

Are the effects transitory?

High rates of inflation caused by large-scale events, whether planned or unanticipated (e.g., a natural disaster) are typically viewed as transitory, or temporary. Consider the 7.3% increase in used car and truck prices which was among the largest contributors to May’s CPI[5]. The increased price of used vehicles was an example of demand-pull inflation where the demand was greater than the supply and also a function of the shortage of semiconductors required to build new vehicles.

During the so-called “Great Inflation” of the 1970s, Americans saw the CPI increase by nine percentage points between 1972 and 1974 and then fall by seven by 1976[6]. Consumers may have felt like they were on a pricing rollercoaster ride during that span, but ultimately, things leveled off. Some point to the Great Inflation as an indicator that the current pressures caused by COVID-19 pandemic will be short-lived.

Federal officials responsible for monetary policy suggest high inflation will be transitory. Federal Reserve Chair Jerome Powell acknowledged the abnormally high inflation rates to a congressional oversight panel in late June, stating, “these effects have been larger than we expected and they may turn out to be more persistent than we expected.” He then went on to say, however, that “the incoming data are very much consistent with the view that these are factors that will wane over time and then inflation will move down toward our goals.”

To many, the inflation levels we’re seeing are also not unexpected. As we emerge from the restrictions of the pandemic, pent-up demand combines with supply shortages to form textbook conditions for price surges. A lot of that may very well be prices normalizing to pre-pandemic rates for restaurants, sporting events, hotel rooms and the aforementioned used vehicles.

The possibility of permanence

There are also reasons to believe some effects of pandemic-era inflation will have staying power. It’s estimated that just over a fifth of all U.S. dollars currently circulating were printed in 2020 at the height of the pandemic[7]. As consumers venture back into the world to spend money on wants rather than needs — vacations, new cars, gadgets — their money won’t get them quite as far as it once did. Studies show that 40 percent of companies are raising or planning to raise selling prices[8].

“I think policymakers and analysts are just as torn about the potential longevity of this current rash of inflation. The Federal Reserve insists on describing it as ‘transitory,’ mostly in an effort to allay investors’ fears and calm markets,” wrote the CEO of one large-scale investment management company in a recent column for Forbes.

Another expert predicts that when the current surge is over, inflation will be at an even higher level than it was pre-pandemic, telling CNBC, “it’s premature to conclude all of this is transitory and where underlying inflation is ultimately going to land when we get through the price normalization.”

The Federal Reserve and most analysts expect high inflation to be transitory, but the full picture may be more complex. Lumber prices, for example, have fallen with reduced demand.  The semiconductor shortage that precipitated inflated used vehicle prices might continue through most of 2022, but it will end. But other inflationary pressures such as demands for higher wages may be long-lived. Employers who have increased wages to attract or keep staff will be challenged to cover higher labor costs without raising prices above levels consumers will tolerate. The Peterson Institute for International Economics suggests making firm predictions requires a bit of hubris since neither professional economists or the bond market can claim much success in forecasting inflation. While our team continues to monitor reports and data, our first responsibility is to provide you and your family with personalized guidance to grow and preserve your portfolios even when fortune-telling is off the table. How have you experienced high inflation in this economy? Do you have specific concerns related to your holdings? Reach out to us. We’re here and ready to help.

Blog commentary and opinions expressed herein represent a snapshot in time and are subject to change. Any discussion or information contained in this blog does not serve as the receipt of, or substitute for, personalized investment advice from Evermay.